The name “Ammon’s Horn” pays tribute to the iconic spiral ram’s horn that is depicted on the ancient Egyptian and Greek god (Ammon or Amun) and is also the namesake for the many spirals that occur in nature (such as hurricanes, ammonite fossils, galaxies, fern shoots). The Italian scholar Fibonacci described this phenomenon though mathematics, as the “golden spiral” or “golden ratio”. The Ammon’s horn is also the anatomical center of the human brain that controls creative energy and memory.

The Egyptian god “Amun Ra” was depicted as a ram-headed man or simply a ram and was considered the “Lord of All” who encompassed every aspect of creation, particularly the sun and wind. He morphed into the Greek version “Ammon”, where he was roughly the equivalent of the Egyptian version, and thought of as “King of the Gods”. Here his form was more man-like, with most depictions of his head, featuring ram-like horns curling around from above his ears.

Our logo is a single golden spiral which closely resembles both the ram’s horn and a gold ammonite fossil, where the swirl is tightly coiled and shows the texture of years of growth and development. In today’s world, the Ammon’s Horn (also known as the hippocampus) is the anatomical name for the center of the human brain that controls memory and creativity. Neurological disorders of the Ammon’s Horn, such as Alzheimer’s and dementia, impair memory and creativity. A portion of our total sales will be donated to Alzheimer and Dementia charities. Linda and Roger note that, “Our hope is that people will find the wines wonderfully “memorable” and inspire creativity in your lives.” 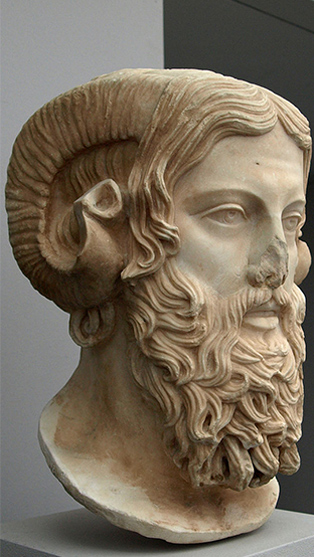